I love the 80s.  I grew up in the 80s.  This show is about growing up in the 80s and it is rad.  This is a retelling of the childhood of Adam F. Goldberg the creator of the show as he grew up in the 80s and his obsession with filmmaking and recording everything  with his camcorder.  The early seasons for this show were quite interesting and remarkable, however as the series tears on it has grown a bit stale relying on an 80s stereotype for each episode.

Freddy Highmore plays a new surgical resident with Autism in this ABC medical drama. Another British actor playing an american. I like this show and the light it puts on people with disabilities and unique circumstances.  However at times it does border on exploiting those same people.  The action centers on the choices the main character makes and those around him as they all deal with his autism.  In a sense this is Doogie Howser but instead of age the conflict is autism.

This show has been on for over 10 seasons and it has made lots of money for the sharks but it has also made lots of money for the entrepreneurs and ABC.  It is what it is, a commercial for the stuff the sharks buy. It is interesting to see how this kind of business is done, but if there is something of substance to  watch, I watch the substance instead.  There are good things about this show: taking those who have nothing and making something out of them.  There are also bad things: Greed.  Every shark has shown greed on this show, but the worst is Kevin O’Leary, the so-called Mr. Wonderful. But if I had the chance to show an invention on this stage I would do so.

Captain Hammer has joined the police force at the age of 45.  Oh my.  This ABC show has been on a couple of seasons now and my initial review was that it was hokey and I loved it.  I still think it is a good show. Nathan Fillion, the lead actor, does a great job and is able to make you like him no matter the situation.  This past season they have tried to make the show more dramatic which is noce but I think they can go a lot farther, but perhaps the distance I want is more than network TV is allowed to go.

This is the Monday when all the shows start to role out for the 2015 Fall Prime Time TV Season and there are a lot of new shows coming out on all the networks along with the ones that have found a way to get their second, third, or maybe even more seasons on the air.

Here is what looks good for each day of the week.  Set your DVRs now because you can't get them all in live..there are way to many!

THE MYSTERIES OF LAURA

HOW TO GET AWAY WITH MURDER 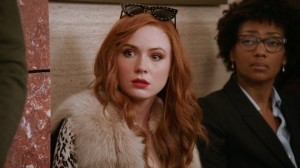 All I want is a show that’s good

With characters that can be understood

With no pretentious plot

Lots of jokes to make me laugh

Lots of action and those who can act

…..I would go on but I think I would put more into writing this parody than the writers of Selfie did on the entire pilot episode.

The concept is taken from Shaw’s Pygmalion or for you musical theatre buffs My Fair Lady.  It is an attempt to modernize the story.  Girl, Eliza, is stuck in a social media rut with tons of likes but no real friends in comes Boy, Henry…no they did not change the first names from the original…some might think that is clever…I think it is lazy….  Boy helps girl to be the life of the party.  That’s it.

The only saving grace of this show is Karen Gillan who plays Eliza.  You may recognize her from Doctor Who and most recently The Guardians of the Galaxy (where she is really unrecognizable).  I will watch this show one more time if it doesn’t improve I will stop. If it does I will let you know.  You can watch it on Hulu or watch the premiere on ABC TUE SEPT 30 8|7c.